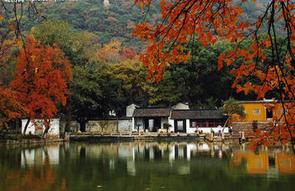 Suzhou Located on the shore of Taihu Lake in southeast Jiangsu Province, Suzhou, a" paradise on earth," is a renowned historical andcultural city with a history of more than 2,500 years. The gardens of Suzhou are famous in and outside of China. Canglang (Surging Wave) Pavilion, Shizi (Lion) Grove, Wangshi Garden, Zhuozheng (Humble Administrator@,@s) Garden, Liuyuan Garden, and the Huanxiu Mountain Villa are treasures of garden architecture from the Song, Yuan, Ming, and Qing dynasties in southern China. In recent years, new scenic spots, such as Zhouzhuang, Luzhi, and Tongli, have appeared in the vicinities. In short, the city of Suzhou features enchanting landscapes, and it has since ancient times been known as a place with a gathering of the talents and plenty of products. It is a wellknown tourist city.

Zhuozheng Garden
The largest private garden of Suzhou, Zhuozheng Garden in Dongbei Street is a historical site under key protection in China. It was included in the list of the World Cultural Heritage.

Huqiu (Tiger) Hill
Rising 36 meters above ground in northwest Suzhou, Huqiu Hill was origanlly called Haiyong Hill. It boasts of 18 scenic spots, including the Duanliang Hall, Hanhan Spring, Shijian Rock, Qianren Rock, anti Jianchi Pond. The octagonal Huqiu Pagoda on top of the hill hay seven stories, (interior and exterior). This pavilionstyle pagoda was built without any timber. Since the Ming time, the pagoda has begun to slant to the north, now with a tilt of 2.34 meters.

Zhouzhuang Tongli and Luzhi
These are three ancient towns south of the Changjiang River, each with its own characteristics. The Twin Bridges, the Shen Family Hall, and the Zhang Family Hall of Zhouzhuang; the two halls and three bridges in Tuisi Garden of Tongli; arhats in the Baosheng Temple of Luzhi as well as clothes worn by the local people have attracted a great number of tourists at home and from abroad in recent years.